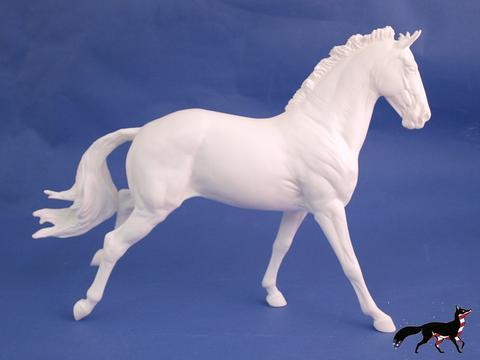 Standing between 15hh-17hh, the Irish Sports Horse gains it's gentle temperament from the Irish Draught and it's speed, athleticism and endurance from the Throughbred (or Warmblood). The breed can be found in many equestrian disciplines including eventing, showjumping, driving and general riding. The breed is know for it's ability to look after and help it's rider in any situation. Due to this trait, many of the police forces in the British Isles use the Irish Sport Horses as their mounts, in addition to the equine divisions of the Army, for example the Household Calvary.Even though the Irish Sports Horse is a cross breed, all Irish Sport Horses are registered with Horse Sport Ireland, who maintains both the Irish Draught and Irish Sport Horse Studbooks.Our Irish Sports Horse model was sculpted by Morgen Kilbourn. Captured mid stride, this handsome and bold gelding is alert and eager, looking for the next obstacle to leap over. The mould was named by Laurie Miller Willis after a competition was launched in October 2015 to name the newest mould to join the Copperfox herd.