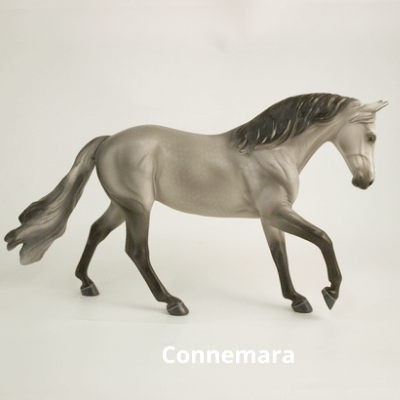 "Cadno", who name translates to "Fox" in Welsh, is a model of a Connemara Pony mare, a breed of pony that originates from Ireland. It is named after the wild rocky Connemara region on Ireland's West Coast where hardy ponies have existed for hundreds of years. Cadno was a previously released Copperfox Model Horse in beautiful dark shaded bay.  250 pieces were made worldwide.  Cadno is sold out!

Connemara's are known for their athleticism, versatility and good disposition, making them a top class performance pony. Ridden by both adults and children, the breed is extremely versatile, competing in showjumping, eventing and dressage events.  They also having the the stamina for endurance riding too. The Connemara is a pony that is a true all-rounder!
In the past three years or so, Connemara ponies have been taking the performance show world by storm. They have quickly become the Copperfox fans' favorite go-to horse to display tack and all types of eventing dioramas.
X
This website uses cookies to ensure that you get the best experience on our website. Read our privacy policy.
I accept